What Digital Alcohol Tester is good for Traffic Police Officer? 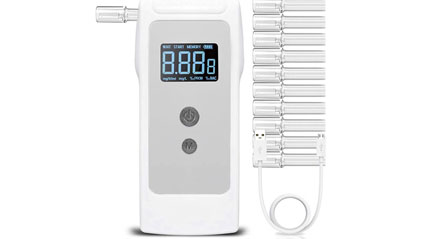 Is it possible to self-calibrate the breathalyzer?

It is impossible for an ordinary person to get the necessary equipment, as well as a gas mixture with a certain content of ethanol vapor. In addition, such equipment costs hundreds of times more than the digital alcohol tester in any official service center. And to calibrate medical breathalyzers to private individuals without the appropriate permission and the availability of certificates is, in principle, prohibited.

What breathalyzer can be used for a traffic police officer?

Officially, you cannot challenge the claims of a traffic police officer if he considers you drunk, except by passing a medical examination for alcohol intoxication at the nearest first-aid post.

However, if you are confident in your sobriety and consider the claims of the traffic police officer unfounded, you can discuss the situation with him by conducting a self-test on the spot using your own digital alcohol tester.

In order for your arguments to sound convincing, you must have a high-quality breathalyzer at your disposal. You can buy certified digital alcohol testers at our website which provide most accurate results. Be sure to show the inspector a certificate of timely calibration of your breathalyzer, confirming its accuracy, if you have one.

I know that breathalyzers differ in the types of alcohol sensors used.

What are the best digital alcohol testers?

It is impossible to choose the best among them, since each type of digital alcohol tester has its own advantages and disadvantages. For example, spectrophotometric sensors are the most accurate and fastest, and they rarely need to calibrate.

However, their cost is very high, so such sensors rarely use even in professional breathalyzers. Solid-state sensors, on the other hand, are cheap to manufacture, but are not as accurate and not very resistant to external factors.

Most often, high-quality personal and professional breathalyzers, including the traffic police breathalyzers, use electrochemical alcohol sensors as a kind of golden mean.

Is it possible to blow a digital alcohol tester without a mouthpiece?

If the design of a particular breathalyzer involves the use of mouthpieces for taking air samples, exhaling into it just like that without installing a mouthpiece does not make sense. The device simply will not work.

However, there are so-called non-contact breathalyzers. They do not require the use of mouthpieces for testing. As a rule, they work through a special reusable funnel. It is necessary to exhale from a distance of 1-2 cm. This method of air intake is less accurate.

Usually it only allows you to establish the very fact of the presence of alcohol in a person’s blood. But not to measure its concentration.

You can’t eat or even smoke before the test. Why?

This is due to several factors. Firstly, any foreign odors that enter the digital alcohol tester when exhaling adversely affect the durability of its operation. Smells of spicy food, flavored drinks (such as coffee) and tobacco smoke settle on the sensor. As a result of which you will have to calibrate it more often.

Secondly, if you test for alcohol immediately after eating or smoking a cigarette. There will be too many foreign impurities in the air you exhale. It will significantly distort the measurement result. The device can show the presence of alcohol in your blood. Even if you are completely sober!

Therefore, before using the breathalyzer, it is important not to eat, drink, smoke or chew gum for at least half an hour.

You should remember that the digital alcohol tester of any breathalyzer is sensitive not only to ethanol vapor. But in general, to any foreign impurities in the air. For the same reason, breathalyzers are not important to store near sources of strong odors. They are good to use in places with heavily polluted air, such as near gas stations.

How to understand when alcohol is completely eroded from the body?

There is a generally accepted classification of the stages of alcohol intoxication. Digital alcohol tester determines based on the level of alcohol in a person's blood:

The rate of alcohol removal from the body largely depends on the physiology of a particular person:

On average, alcohol excretes from the body at a rate of 0.1-0.2 ppm per hour. It is impossible to say exactly how quickly this or that person will sober up.

Where can I calibrate the digital alcohol tester?

Professional calibration of the breathalyzer with warranty and confirmation can be carried out in two places.

As a rule, each manufacturer of breathalyzers indicates the addresses and phone numbers of service centers in the regions in their instructions, as well as on their official website. To find contacts of a third-party center that provides repair and calibration services for digital alcohol tester in your city. Use a search engine on the Internet.

Before the visit, it is best to call and find out if your breathalyzer model can be calibrated in a particular center.

How often should a breathalyzer be calibrated?

It depends on the specific model of breathalyzer. The exact calibration interval must be indicated in the technical characteristics of the device. As a rule, it is one year or 100 to 500 tests. For convenience, a test counter is built into many models of digital alcohol tester. It reminds the user of the need for timely calibration of the device.

Prev: How Does an Alcohol Detector Sensor Work?

Next:  Alcohol Meter for Sale in China 2022: Szeek