Home » Which Alcohol Testing Meter is Best for You In 2022?

Which Alcohol Testing Meter is Best for You In 2022? 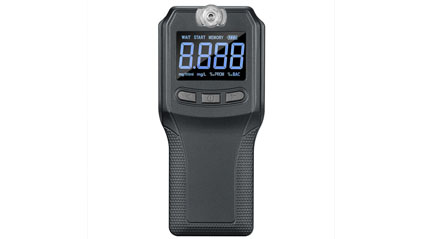 What is a blood alcohol tester?

An alcohol testing meter can be used to measure whether and how much alcohol someone has drunk. If you have ever been stopped by the police and had to “blow”. Then you were already dealing with such a (digital) breathalyzer.

But such a device is not only recommended for the police. For example, if you want to be sure after a cozy evening with friends and wine. You are still fit to drive and that you comply with the legal alcohol limits.

You can use a handy test device to determine your blood alcohol content within a few seconds. This Way you play it safe and save yourself a lot of trouble. It's better to trust a reliable measuring device than just your instincts.

This is how the alcohol testing meter work

The blood alcohol level measuring devices measure the alcohol content in the air you breathe within a few seconds. It uses this to calculate your blood alcohol content (measured in per thousand). This value is decisive for whether you are still fit to drive or not. What legal penalties you will face if you should drive under the influence of alcohol.

With a blood alcohol meter, which is also known as a breathalyzer. The alcohol content in the air you breathe is measured. To do this, blow into a tube attached to the device. The mouthpieces can be bought later to ensure optimal hygiene.

Most digital measuring devices indicate the value in per thousand. They are therefore also referred to as per thousand testers.

Which alcohol testing meter are there?

There are different alcohol tester variants, which differ according to the area of ​​application and frequency. In addition, the different models vary in accuracy. That is why we have looked at the available types and their variants in detail for you. We are providing a clear overview here. So that you can choose a breathalyzer that meets your needs.

You are most likely familiar with the digital hand-held measuring devices from traffic checks by the police. But these alcohol testers are also the best known. These are most used devices for private use to determine the alcohol content.

With these alcohol testing meter, you blow into a tube attached to the device. The device then displays your blood alcohol content on a digital display.

The measuring range goes up to 5 per thousand

The devices are really handy and fit in the glove compartment or in a handbag without any problems. Another advantage of the digital blood alcohol tester is its accuracy. Because depending on the alcohol testing meter, the measured values ​​only have a maximum deviation of 0.05 per mile!

You are always the right choice if you plan to test regularly or want to test many people. For example, after a party or as a party gag. Thanks to interchangeable mouthpieces. The devices are hygienic (and can be purchased later) and can also be used by several people.

The deviation is therefore very small and the alcohol testing meter also come close to the values ​​​​of the police blood alcohol tester.

The operation of the electronic breathalyzer is quite simple

These devices come with a mouthpiece in which to blow. The internal sensor will be able to calculate the amount of ethanol present in the exhaled air. It reports the result as a percentage on the LCD display. Later you can check by reading it. Moreover, most of the models emit an acoustic signal if the limit of 0.5 g / l is exceeded.

Before using the alcohol testing meter, it is important to make sure of its average temperature. As if the internal resistance is too hot or cold it may not work properly. In fact, it often happens that the less expensive models tend to give incorrect readings in tests after being kept for several hours in a place with high temperatures.

Chemical breathalyzers are generally disposable and work according to the same principle. Since they do not have a display. The results must be checked through a table with a chromatic scale to be checked after carrying out the test.

In general, the pink color is used, which can go from light to dark depending on the alcohol content detected. The alcohol testing meter are less accurate than the electronic ones which in fact are preferred by the Police for carrying out the various checks and tests.

However, you are not admitted to court for criminal offenses, but are considered to be conclusive in the event of an administrative offence. As a rule, therefore, a blood test is carried out by the police.

If during police check alcohol testing meter has already detected alcohol in the blood and the person tested is said to have committed a crime (e.g. suspected very high alcohol content when driving a motor vehicle, in an accident, etc.) - then a blood test is usually carried out.

Here blood is taken and the alcohol content in the blood is then determined. In the case of criminal offenses, blood tests are conclusive in court.

It's better to test before than pay afterwards

Buying a high-quality breathalyzer is worth it if you drive drunk once and get stopped by the police. From 0.5 per mile you not only get two points in Flensburg, you also have to pay a fine of €500.

If, on the other hand, you invest in a (good) alcohol testing meter and check your blood alcohol content before you drive, you can save a lot of money. In addition, of course, there is the danger of causing an accident while under the influence of alcohol.

If people are harmed in the process, your financial loss will far exceed the €500 fine. You can get a reliable breathalyzer from as little as €129 - a bargain compared to the fine, the danger and the hassle.

Next: What is Alcohol percentage tester? Beginner’s Guide