Home » How Does The KT004 Breathing Ketone Meter Work? 

How Does The KT004 Breathing Ketone Meter Work?  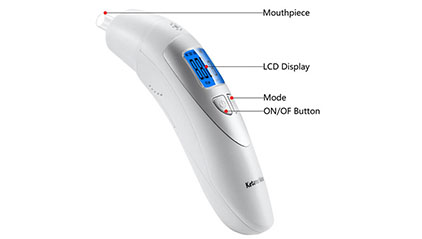 What Is The Breathing Ketone Meter? What is the KT004?

The word ketosis comes from a Greek word that means to break down. In medicine, it refers to a state where the body is breaking down fat.

Ketosis is a natural process of burning fat for energy instead of carbohydrates. In order to enter ketosis, you need to consume fewer than 50 grams of carbs each day. This causes the body to use fat as its primary source of energy instead of glucose (sugar).

The liver converts fatty acids into acetoacetate, which then enters the bloodstream and travels to the lungs. When acetoacetate reaches the lungs, it is converted back into acetone and exhaled through the breath.

A breathing ketone meter is a device that measures your breath for specific chemicals called ketones. These chemicals are produced by the liver in response to high levels of blood sugar, which can indicate type 2 diabetes or prediabetes.

The KT004 Breath Ketone Meter is a small handheld device that detects acetone in your breath. The device consists of two parts: a plastic mouthpiece with an opening at one end and an LCD display on top (see image below). You place the plastic mouthpiece over your mouth and exhale into it for 10 seconds or so before blowing hard enough so that it sounds like you're blowing up balloons. The device then reads and displays your current blood ketone level.

If we want to understand how a device works, we must first know its structure. It is a small handheld inspection device. The shell material is made of ABS material, which is very light. Including the carton weight of the packaging, it only weighs 145 grams.

You can see that its external structure is very simple: mouthpiece, LCD display screen, and two buttons. One of the buttons is the device switch button, and the other is the mode selection button.

What’s the sensor technology of the KT004?

SZEEK's KT004 breathing Ketone meter uses semiconductor sensor technology. The sensing layer is composed of a semiconductor material and a metal film whose resistance varies according to the concentration of ketones in exhaled air.

The metal film is covered with an insulating layer, which acts as a separation layer between the sensing layer and the electrode. The sensing layer is made up of two parts: one is responsible for sensing the concentration of ketones in exhaled air and another part is responsible for generating an electrical signal that corresponds to the concentration of detected ketones.

How Does The KT004 Breathing Ketone Meter Work?

Ketones are a byproduct of fat metabolism. When you eat too many carbohydrates and not enough fat, your body has to break down your fat stores for energy and use the ketones as fuel. The presence of ketones in the blood can be detected with a simple urine test, but breath monitors are fast, easy, and convenient.

How does it detect ketones?

Ketones are produced in your body when you're fasting or following a low-carb diet. The breathing ketone meter is based on the fact that your breath contains traces of acetone, which is one of the many types of ketones produced by your body.

What can affect the accuracy of your test results?

The potency of your breath sample. You will get more accurate readings if you take deep breaths and blow for longer than usual — about 10 seconds or more.

The amount of time between when you take the breath sample and when you perform the test. Ideally, you should wait at least 3 minutes after taking a breath sample before testing it.

Besides, what you eat and drink before the test will affect the accuracy of the test results. For example, if you eat too many carbohydrates or proteins, it may interfere with the results of your test. That's because when you eat too much protein or carbohydrates, they'll be converted into glucose (blood sugar) and used as energy by your body instead of being used as fuel for ketone production. Therefore, fewer ketones will be produced than there would have been if no food had been eaten at all.

How Should You Use KT004 Breathing Ketone Meter For Ketone Testing?

KT004 is a portable handheld ketone testing instrument, which is very easy to use. Here are the steps to use it for you:

Take out your KT004 breathing Ketone meter and press the ON button. You only need to wait for the 20-second warm-up time.

Check the mouthpiece on the instrument to see if it needs to be replaced. If it's clean, you can blow directly on it. The recommended blowing time is at least 10 seconds.

Finally, look at the color of your saliva on the screen of KT004.

Prev: Easy To Get! A Portable And Powerful Breathalyzer Near Me

Next: How To Choose From Multiple Alcohol Testing Kits?